Myra used her housekeeper, Alma Schmidt, as a subject in several of her pictorial photographs of Dutch domestic life. Schmidt wore costumes and posed in a variety of theatrical scenes. No further record of their relationship exists.

No, more a holy meditation
on surface and stain

The inland
glow of white shoulders

vestige of one breath-
takingly long

and sexual arm
which grasps

the ledge
of the cauldron

as she curves onward.

of water bucket, angle of  the invisible
skin dimpled

underneath her arranged garment ~

a light-stroked body,
conflicted as rosewater, as clotted cream~

Alma, grace of more
than poor

Our Lady of the Scullery Shimmer ~

May I serve you?

gloss of what the photograph

An aperture, a flash

of the nakedly conscious eye ~

a part of and apart ~

blessing identity until it blinds us.

Once, on a sunlit afternoon

a maidservant, an ingénue,

into what this moment you

Susan Rich is the author of three collections of poetry, The Alchemist’s Kitchen (2010) named a finalist for the Foreword Prize and the Washington State Book Award, Cures Include Travel (2006), and The Cartographer’s Tongue / Poems of the World (2000) winner of the PEN USA Award for Poetry. She has received awards The Times Literary Supplement of London, Peace Corps Writers and the Fulbright Foundation. Recent poems appear in the Harvard Review, New England Review, and The Women’s Review of Books.

“Polishing Brass” is an ekphrastic poem, based on a photo by Myra Albert Wiggins: 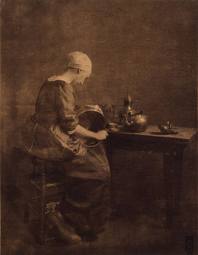