by Craig Seasholes, Librarian at Sanislo Elementary in West Seattle

Last year, early in second grade, Cynta-Liyah started stoppin’ by the library as others headed to the playground. She’d ask if this was a time she could stay inside to write a poem.

15 minutes later, as other kids were streaming in from recess, she’d quietly hand me a short piece she’d written.  Just picked. Fresh. Ready to be added to our poetry anthology. She’d smile, then slip ’round the corner and back to class for the final hour of the day.

Remarkable. And that was before she started bringing in the boys.

Boys whose names were heard as teachers raised their voices “Cut-that out-and-stoppit-NOW” levels. Boys who tied teachers in knots of frustration and sent them over the line and down the hall to the principal’s office. Boys who would look up from the chair outside the principal’s office while classmates went out to lunch recess and their teachers headed to the lounge to flush their frustrations with “I can’t believe he did it again” conversations over lunch.

But later at the start of our  short afternoon recess,  I’d see these boys with Cynta-Liyah. Coming into the library for recess, asking for permission to write another poem.  “Please?”  She’d plead, “He’s my cousin,” or “He wants to try.”  “OK?”

That’s how our Poetry Club began.
Cynta-Liyah taking boys under her wing.
Working together on a little poem.
Finding something good inside; going and growing from there.

This year other second graders saw what was happening and asked to stay in, too. Our poetry club was formally announced. Girls writing friendship poems to one another. Others began writing love notes, birthday wishes, Valentines and “things I love”  lists that capture perfectly their precious aspirations and emotions, preserved on paper against the amnesia of adolescence yet to come.

April arrived bringing National Poetry Month and Elliott Bay Books offered an opportunity for our poetry club to recite a few “Poems to Learn By Heart” for Caroline Kennedy’s public appearance in Seattle.  I spotted Janet Wong’s “Liberty” as a perfect group recitation, following the cadence and updating the sentiments of The Pledge of Allegience we recite at the start of each school day.

I pledge acceptence of the views
So different that make us America.
To listen, to look
To think and to learn.

One people, sharing the earth
Responsible
For liberty and justice for all.

Our poetry club kids took to it immediately, their faces and names reflecting beautifully the sentiments of the poem: Wang, Vu, Nguyen, Martinez.

I also spotted this as an opportunity for special students to shine before a large public audience. It was easy to choose two by Langston Hughes, including “The Dreamkeeper” for Quinton:

Bring me all of your dreams,
You dreamer,
Bring me all your
Heart melodies
That I may wrap them
In a blue cloud-cloth
Away from the too-rough fingers
Of the world.

and “Dream Variations” for Cynta-Liyah:

To fling my arms wide
In some place of the sun,
To whirl and to dance
Till the white day is done.
Then rest at cool evening
Beneath a tall tree
While night comes on gently,
Dark like me-
That is my dream!

To fling my arms wide
In the face of the sun,
Dance! Whirl! Whirl!
Till the quick day is done.
Rest at pale evening…
A tall, slim tree…
Night coming tenderly
Black like me.

A week before the event, I was informed that Ms Kennedy would like to visit our school, to bring media attention to the role of school libraries and to meet our student poets. Ms. Tsuboi’s first grade class came into the library with their classroom poetry notebooks in hand, and read several poems.

Then the poetry club kids came in, with “Liberty” followed by Quinton and Cynta-Liyah sparkling with irrepressible joy.

And when Caroline Kennedy asked, “Why do you like the library?” it was Quinton who busted out with the quotable quote, “I like the library because there is never someone mad here. Books make people happy!” 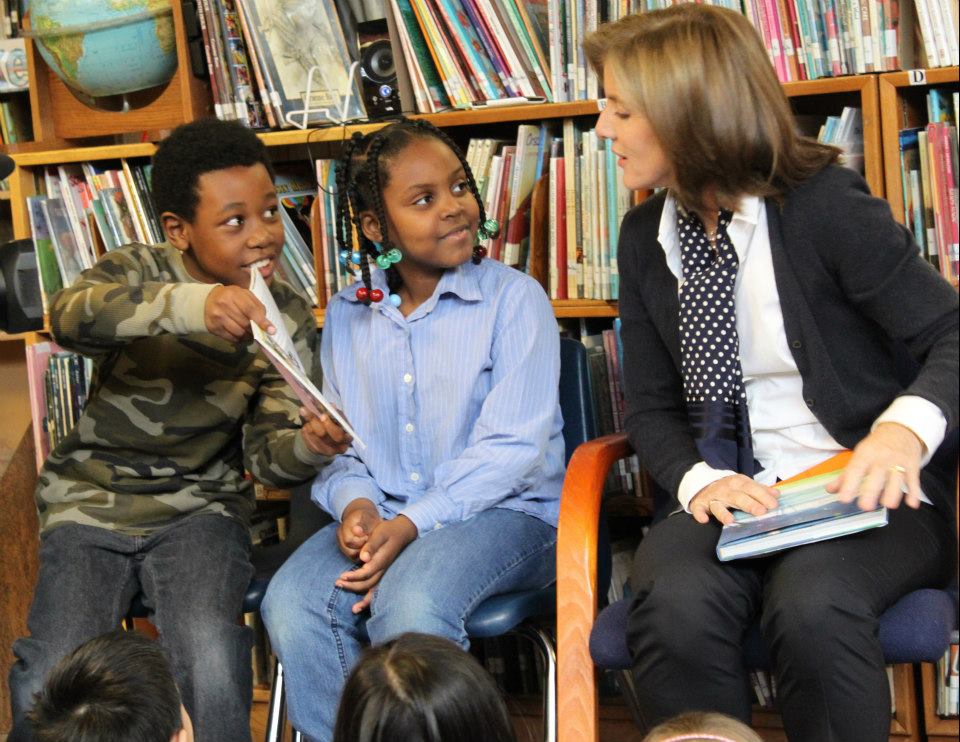