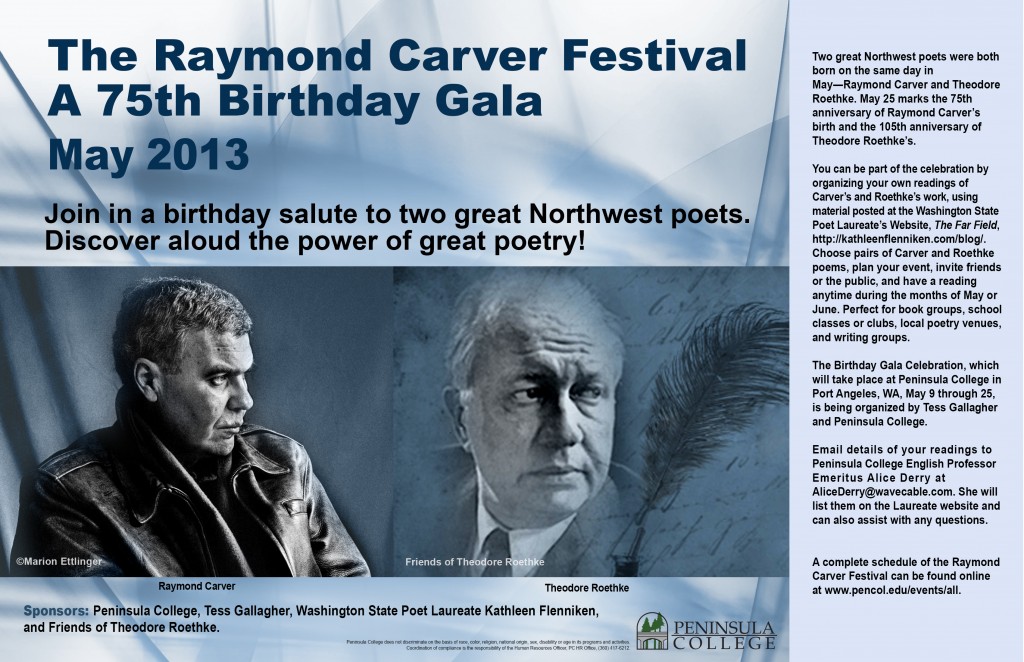 The Raymond Carver Festival will be celebrating the legendary author and poet’s 75th birthday in a series of events this spring in Port Angeles.  You are invited to take part in your own community with programs for adults and children, schools, civic organizations, and libraries.

Please note the “Carver/Roethke” button that has been added to The Far Field banner, above.  There you will find resources to help you create a program around the poems of Washington’s own Raymond Carver, along with Theodore Roethke.  Poet Tess Gallagher (Carver’s widow and a student of Roethke) and poet Alice Derry have secured permissions for poems  by Carver and Roethke that you may download for reading, recitation, and discussion, and have designed lesson plans for high school students and elementary students.  There is even a beautiful poster that you can download to help you publicize your event.

Please help us spread the word about this marvelous opportunity!

Where there are beech trees, the land is always beautiful.
— a phrase by Richard Jeffries given me by my friend Bob Pyle,
a foremost butterfly expert

Rain had soaked you, Bob,
as you scrambled down a hillside
in Switzerland, beeches opening their leaves
like an overture to Beethoven.

You couldn’t work up courage to visit
the great Nabakov and talk butterflies.
What would you have to say?
“I’ll come back,” you promised yourself.
Before you could, he was dead.

How many times I’ve gone that same distance
in a foreign country, found what I’ve hungered for,
but couldn’t ready myself
to brave the stares and break silence
with rasped, clotted speech—
a near miss of how words
in another language should sound.

Regret. Unable to discharge debt,
your life became
what you didn’t have a chance to tell him.

Half an hour to visit the viewpoint at Königstuhl,
and my companions, far ahead, anxious to see
what the guidebook promised.
I dawdled as always,
hoping something would speak.

Nothing could match our Northwest firs,
I scoffed—but disdain can open a space.
Around me the smooth gray of the giant beech trunks,
their unreachable canopy, filtering light,
a kind of silence: holding fast
the chalk cliffs above the Baltic.

I was standing where Friedrich stood
when he painted sea and jagged rock, framed
by these sheltering beeches—a Romantic painting,
the trees guardians, keeping
his three wanderers from the edge.

Buchenwald—beech forest. The one
near Weimar no different in its hundred-foot trees
rising in full, trembling leaf.

Buchen, hollow and breathy,
wind in the highest branches,
point of no return. But Wald brings me back,
and I lean into the trees, trunk to trunk.

A word can be tied by torment
to so many things opposite of tree and leaf,
of bare branch and breaking forth
from green-gold, red-brown bud—
that to say it
is to break a certain kind of faith
with those who heard it as death.

Which break, then, must be rescued
from silencing.

Say Buchenwald. Without its sound,
we might forget this forest.
Trees don’t need to speak. We do.

first printed in Fine Madness, then in Floating Bridge Review

Alice Derry’s newest collection of poems, Tremolo, is forthcoming from Red Hen Press in 2012. It received a 2011 Washington Artist Trust Award. Strangers To Their Courage, from Louisiana State University Press, 2001, was a finalist for the Washington Book Award. She has two previous full collections, Stages of Twilight (chosen by Raymond Carver) and Clearwater (Blue Begonia Press). A chapbook of translations from Rainer Rilke appeared in 2002 from Pleasure Boat Studio, New York City. Derry taught English and German at Peninsula College in Port Angeles, Washington, for twenty-nine years, where she co-directed the Foothills Writers’ Series.