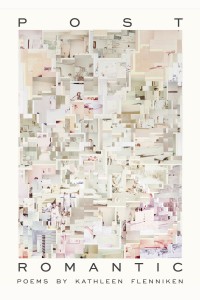 In her wide-ranging third book, poet Kathleen Flenniken undertakes the difficult task of re-seeing what is before us. Post Romantic fuses personal memory with national and ecological upheaval, interweaving narratives of family, nuclear history, love of country, and a dangerous age moving too fast. Flenniken takes these challenging moments—bits and pieces of childhood, marriage, cultural touchstones—and holds them up to the light, seeking comfort in a complicated world that is at once heartbreaking, confounding, and dear.

The surface range of Kathleen Flenniken’s new community of poems is admirably vast.  A loving little lyric poem on reading a son to sleep is only one page away from the poem “Helicopter, Chernobyl.”  A poem on what we do to our oceans (“A raft of debris as large as Africa / accumulates in the Pacific gyre”) is not far from “Pillow Talk,” a rich, perceptive look at what we do to one another.  But the poet’s “post-romantic” sensibility hovers over all of these poems, many of which track love from its giddy flowering, through its many disappointments and hibernations, to a late, mature moment when a child’s voice “calls softly through their closed door / as though they were one person.” And always (as with the dull drab maiden ladies in a museum room “swaying so as not to be confused for displays”) we find those Flenniken lines that allow the language of poetry to snap into existence out of the language of blah: “the patience of a low place in the land / waiting to become a sea.”

Flenniken’s ambition is fully realized as she skillfully enlists a variety of innovative forms and voices. The result is stunning. Post Romantic is both a product of and a gift for challenging times. If poetry can sustain us—and I believe it can—this collection is a lifesaver.

Not only does Flenniken grapple with personal feelings about loss, fear, and growing older, she also examines, with a wider lens, white America’s romantic view of the past. The poems are layered so that we move seamlessly between childhood, marriage, histories of war operations, and marginalization and displacement of others.

These poems interrogate an emotional condition and constitute an inquiry into its history of becoming.  Together they chart the sojourn of one heart through time’s territory of change, doing so with a piercing honesty and beauty.  Post Romantic is mature work of a high order by a brave and serious poet.  It speaks the truth.

—David Guterson, author of Snow Falling on Cedars and winner of the PEN/Faulkner Award 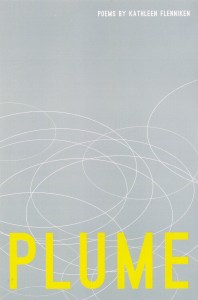 Kathleen Flenniken’s second collection of poems, Plume, was selected by Linda Bierds for the Pacific Northwest Poetry Series, and published by University of Washington Press in 2012. It won the Washington State Book Award and was a finalist for the Pacific Northwest Book Awards and the William Carlos Williams Award for the Poetry Society of America. Plume also won a Poetry and Literature Design Award from the Association of University Presses for book designer Ashley Saleeba.

The poems in Plume are nuclear-age songs of innocence and experience set in the “empty” desert west. Award-winning poet Kathleen Flenniken grew up in Richland, Washington, at the height of the Cold War, next door to the Hanford Site where “every father I knew disappeared to fuel the bomb” and worked at Hanford herself for three years as an engineer. By the late 1980s, declassified documents revealed decades of environmental contamination and deception at the plutonium production facility, contradicting a lifetime of official assurances to workers and their families that their community was and always had been safe. At the same time, her childhood friend Carolyn’s own father was dying of radiation-induced illness: “blood cells began to err one moment efficient the next / a few gone wrong stunned by exposure to radiation / as [he] milled uranium into slugs or swabbed down / train cars or reported to B Reactor for a quick run-in / run-out…” Plume, written twenty years later, traces this American betrayal, and explores the human capacity to hold truth at bay when it threatens one’s fundamental identity. Flenniken observes her own resistance to facts: “one box contains my childhood / the other contains his death / if one is true / how can the other be true?”

The book’s personal story and its historical one converge gradually and subtly with enriching interplay and wide technical variety, introducing characters that range from Carolyn and her father to Italian physicist Enrico Fermi and Manhattan Project health physicist Herbert Parker. As a child of “Atomic City,” Kathleen Flenniken brings to this tragedy the knowing perspective of an insider coupled with the art of a precise, unflinching, gifted poet.

Kathleen Flenniken came to poetry late, after working as a civil engineer and hydrologist at the Hanford Nuclear Reservation. Her first book FAMOUS won the Prairie Schooner Book Prize in Poetry, was named a Notable Book by the American Library Association, and was a Washington State Book Award finalist. She teaches poetry and is a co-editor and president of Floating Bridge Press. She lives in Seattle, Washington.

“Moving deftly between haunting lyric and disturbing documentary, Kathleen Flenniken packages recent history in a wide variety of poetic forms and styles. Set at the Hanford plutonium production site, where the poet grew up and about which she has done impressive research, Flenniken’s Plume raises the bar for documentary poetry, moving us with its timely and important subject matter as well as the meticulous craft of its poems.” –Martha Collins, Author of Blue Front and White Papers

The beautifully wrought poems in Plume are as well-tuned morally as they are musically. And their lamentations are epic: hubris and its disastrous consequences, love and betrayal, human folly, human fragility. The voices that wind like smoke through the book range from smug to harrowing, but at the center of them all is the voice of a child who simply believed what she was told (as did most of the adults), intertwining with the questioning voice of the adult she has become. The child was “so proud to be a girl America could count on”; the adult says, with irony, “We called it the arms race/ and there were two sides.// It was simple.” The adult sees that a fisherman “caught his limit”—of radiation as well as fish—“and never knew.” The story behind these songs centers on the Hanford nuclear reactor in Richland, Washington—Atomic City. The town looks like any other suburb of the time, but here the residents are “sugared by these winds,” and milk trucks collect bottles of urine from porches. The questions raised and emotions stirred resonate far beyond their starting point. Plume is an enormously important and moving work of art. –Sharon Bryan

For links and resources related to the Hanford Story, please visit the Plume Page. 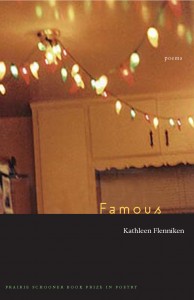 Kathleen Flenniken’s first collection, Famous, was winner of the 2005 Prairie Schooner Book Prize in Poetry and published by University of Nebraska Press in 2006. It was a finalist for the Washington State Book Award and named a Notable Book of 2007 by the American Library Association (ALA).

Now available as an audiobook on Audible featuring Mia Vergillito in an excellent performance.

“Surely it is rare to come across a poet of familiar contemporary experience like Kathleen Flenniken, whose imaginative, convincing tropes, sense of rhythm and sound, sharp intellect, narrative instinct, and resistance to cliché transform that experience into art so compelling that it makes us wonder how have we come to doubt it could be done?”  –Marit MacArthur,  The Bloomsbury Review

“There is not a shred of pretentiousness [in these poems]….  Famous is a genuine treasure.”– Barbara McMichael, The Seattle Times

“There’s a winning surface modesty here: it isn’t Abraham Lincoln who merits the poem, but his oft-maligned wife; not Edna St. Vincent Millay, but her stay-at-home husband; not the Taj Mahal, but the everyday International House of Pancakes. Still, in Flenniken’s hands, these occasions rise toward urgent news—as when, in ‘Shampoo,’ the memory of a mother’s declining health soulfully becomes one with the headline about a submarine’s sinking—until the leastmost of us are transformed, poem by poem, into the famous.” —Albert Goldbarth

“Whether it’s buying orange cotton capris or thinking of Robert Lowell’s last taxi ride, eating at the House of Pancakes or staring into the deep, knowing gaze of a newborn, Famous makes it new again. Exploring the external trappings of contemporary life as well as the internal cadences of a mind that wants at once to be ‘shocking and irresistible,’ Kathleen Flenniken takes us into the slipstreams of fame, where our daily dramas play themselves out in the ‘wild uncoded rhythms’ of the imagination.” —Judith Kitchen