A Thought in the Shape of a Bird

A thought in the shape of a bird
unfolds its subtle origami in three beats:
leaf / wren / leaf.

A gesture in the shape of habit
worrying the pavement for seeds,
its tail tipped straight up.

Calder’s “Eagle,” fades red
into the chestnuts beside the museum.
The great, hooked beak, the cocked tail

distinctly flanged and wren-like, though I’m not sure
it is a tail. There’s no body here—
only line and curve, weld and bolt,

the scattershot lines of something
I’ve seen before. Tail, brow, beak.
Or glide, spread, crouch.

I can’t account for the piece that stands
straight up—

until a crow alights on top
and casts a languid eye on this poor human
scrabbling over the wet grass below,

and I feel a jot of pity for the wren
who spasms into flight at my approach,
stitching escape across each retina.

This wren
squats in my path, with the gravity
of a dead thing. Only a leaf

I’ve overtaken now, passed by
while the mind keeps circling,
watching for movement, some flash or flicker under the surface.

That’s the meat calling. And the mind,
with its inquisitive talons, will answer. Will tip itself over
into the pure line of its sight

“A Thought in the Shape of a Bird” originally appeared in Crab Creek Review. 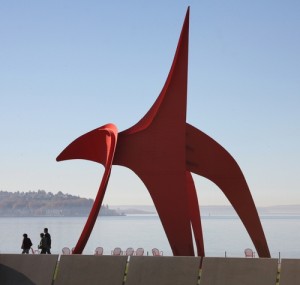